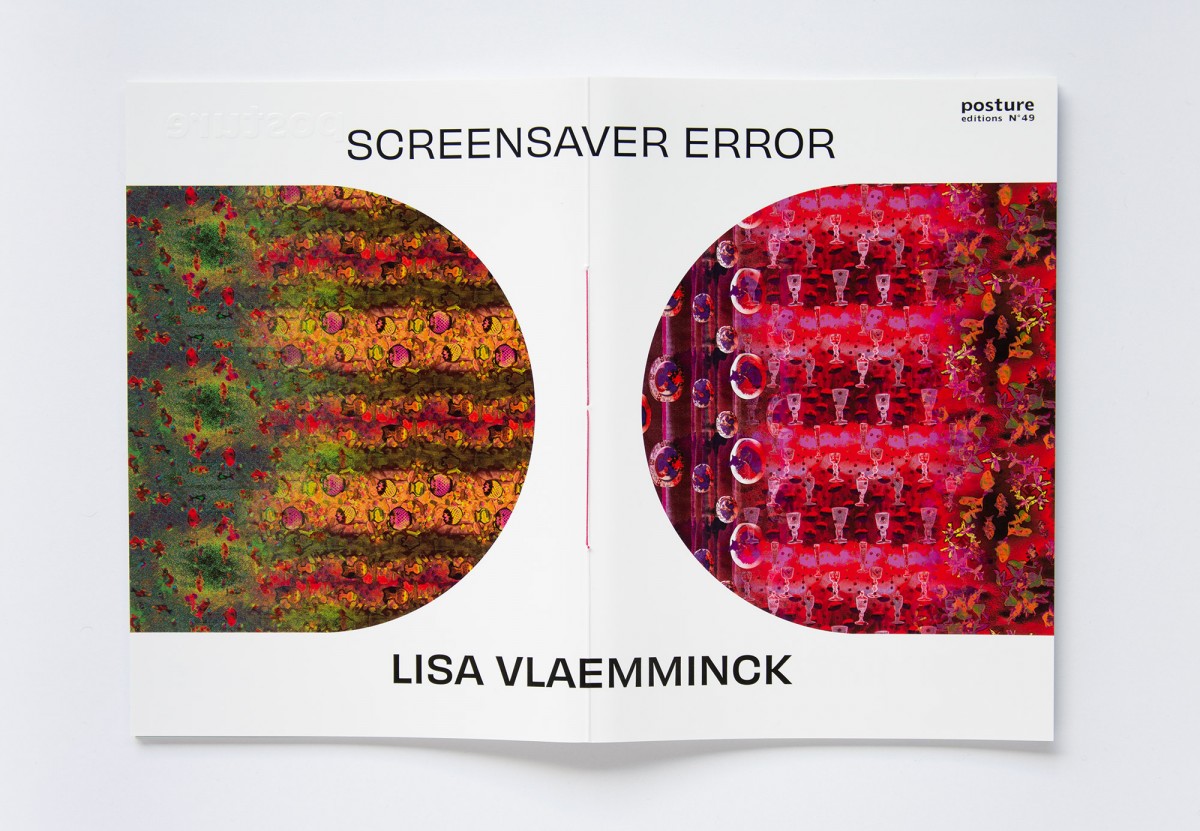 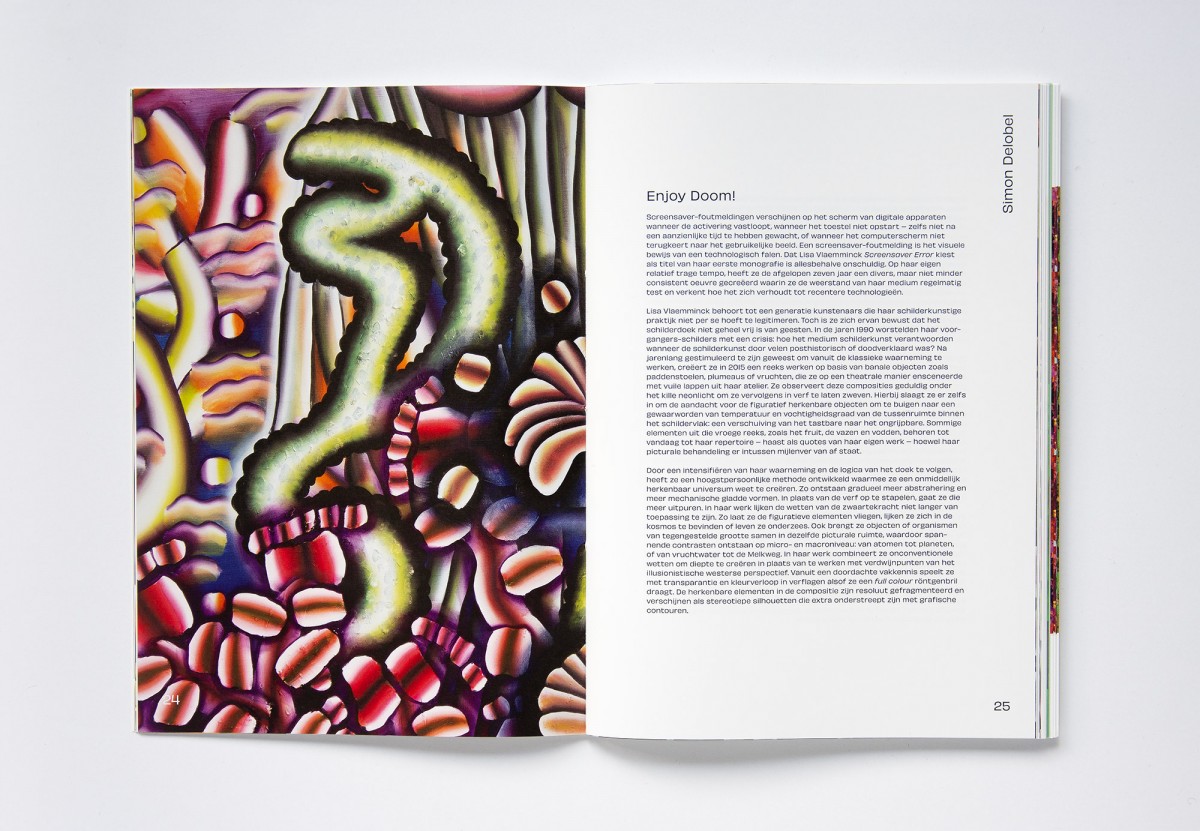 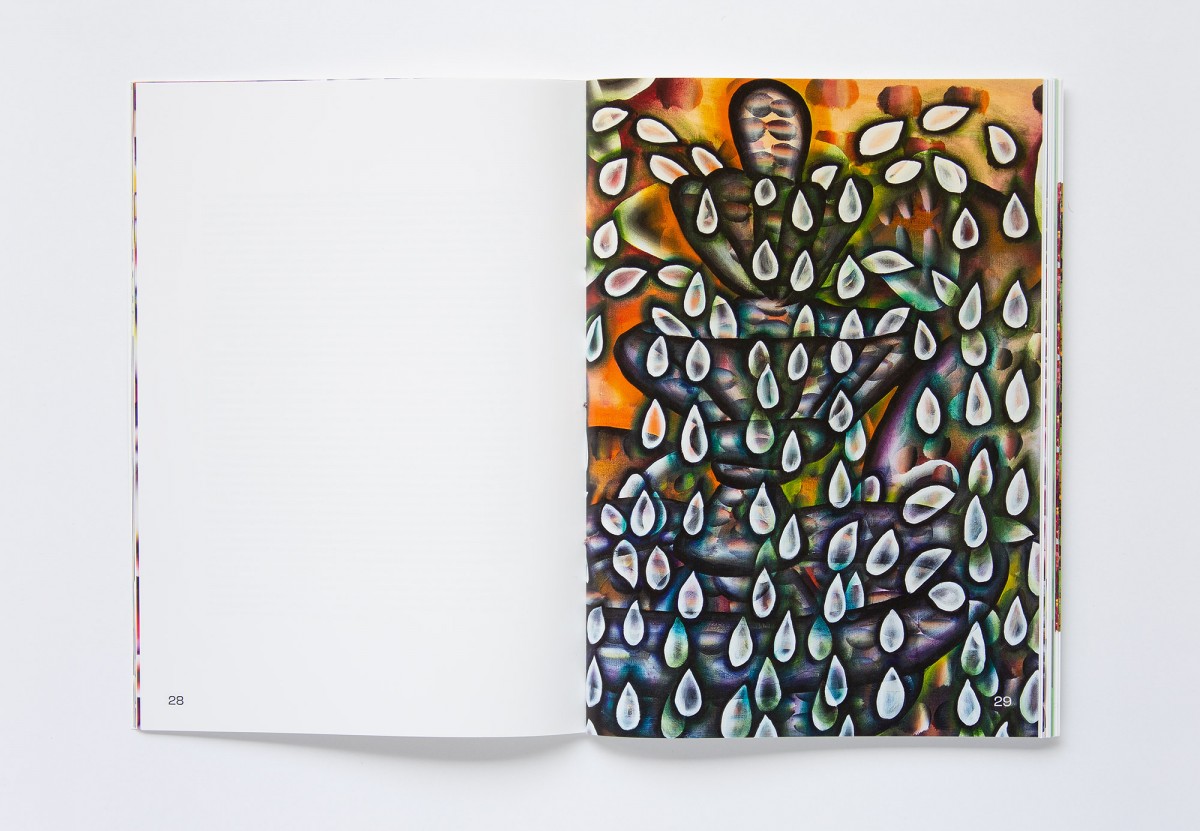 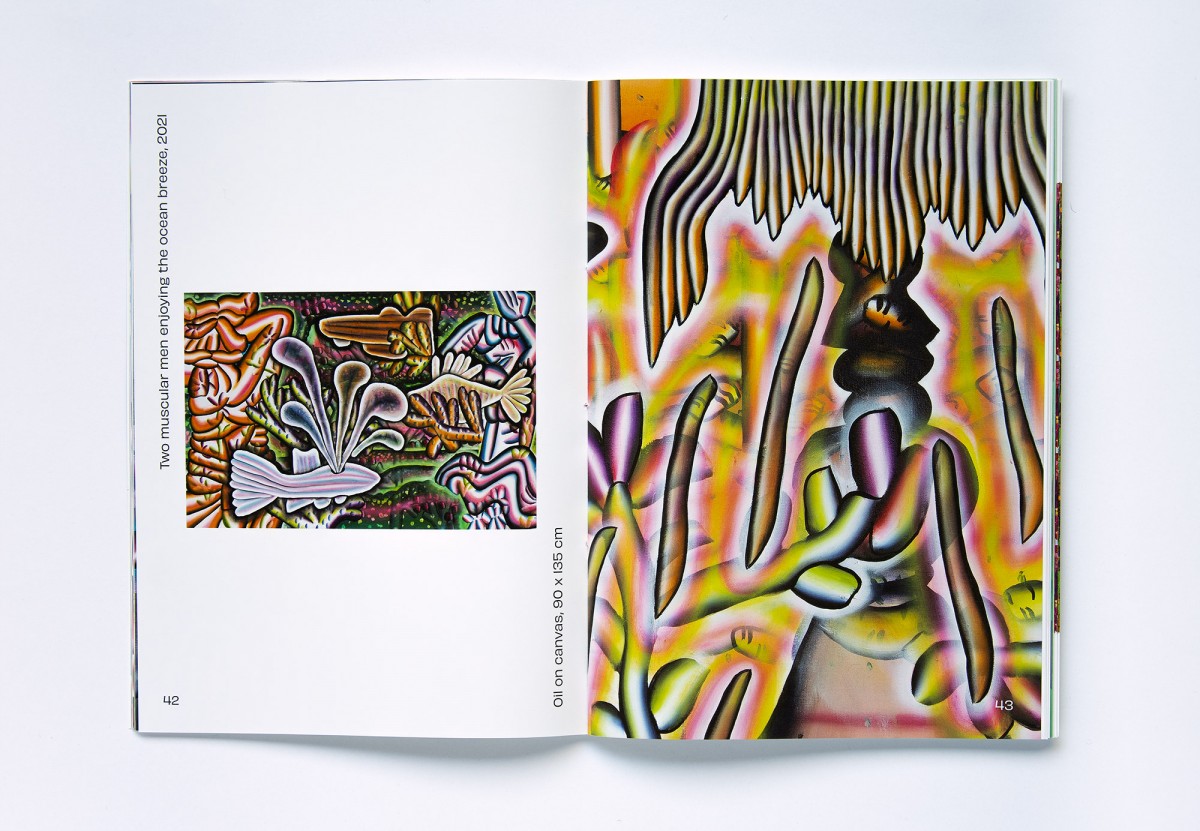 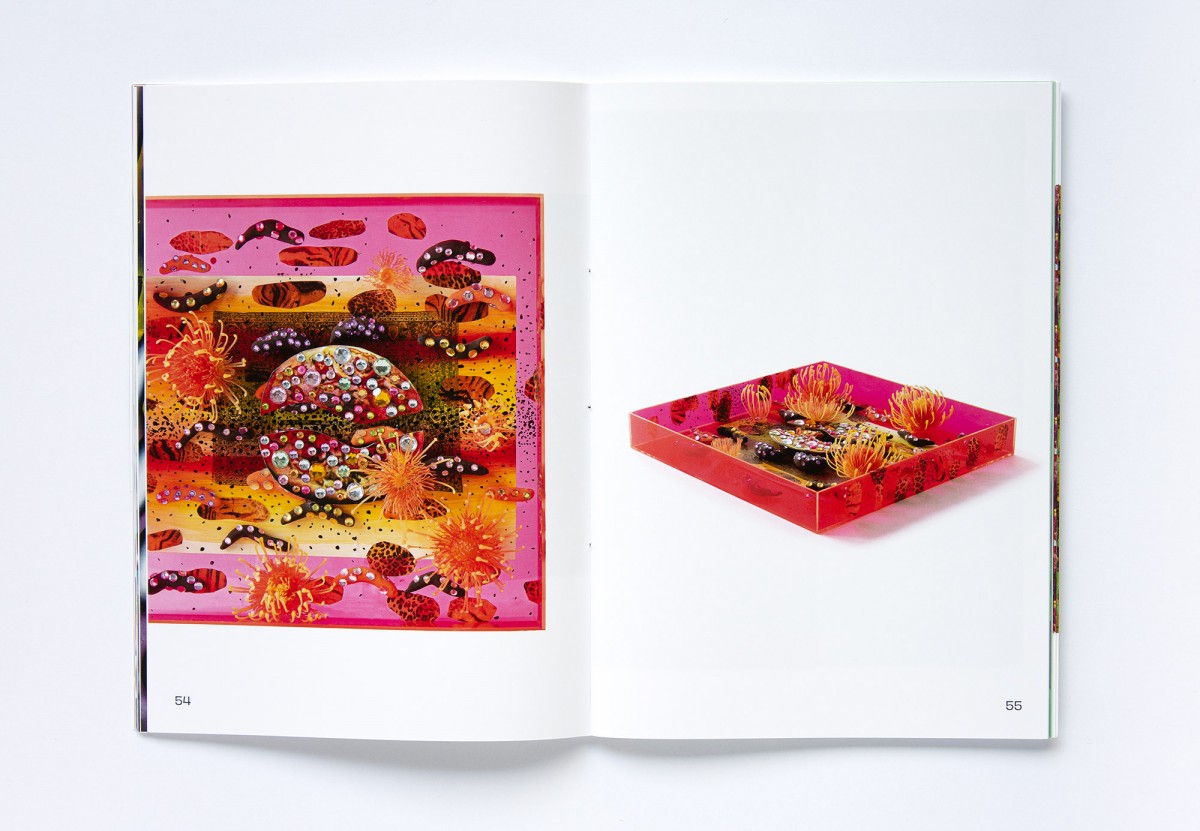 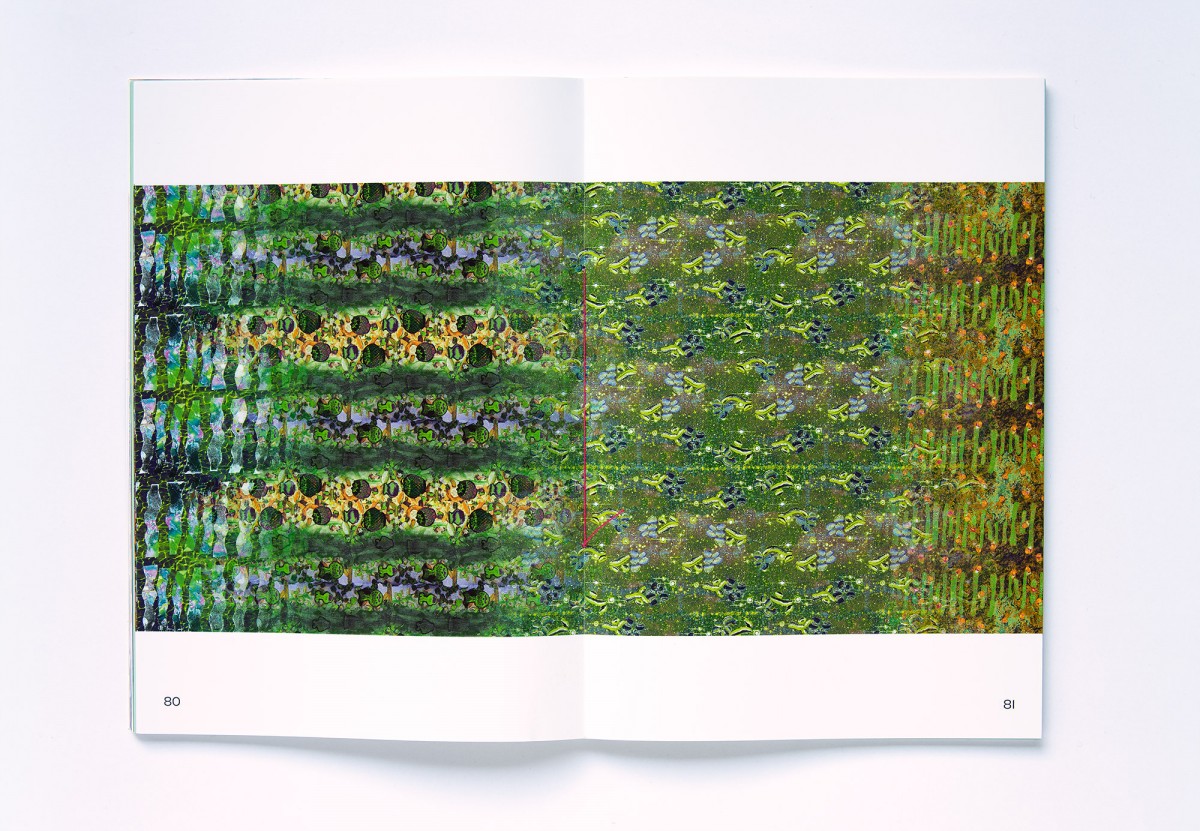 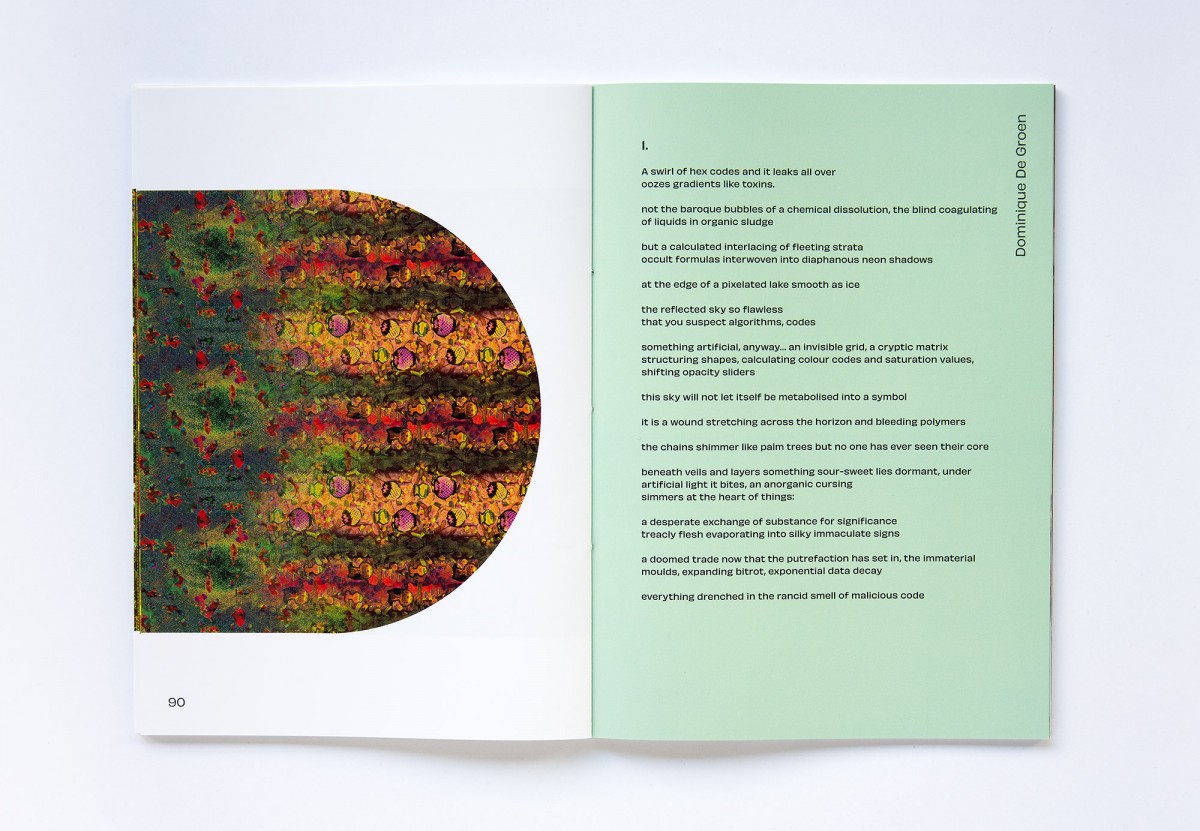 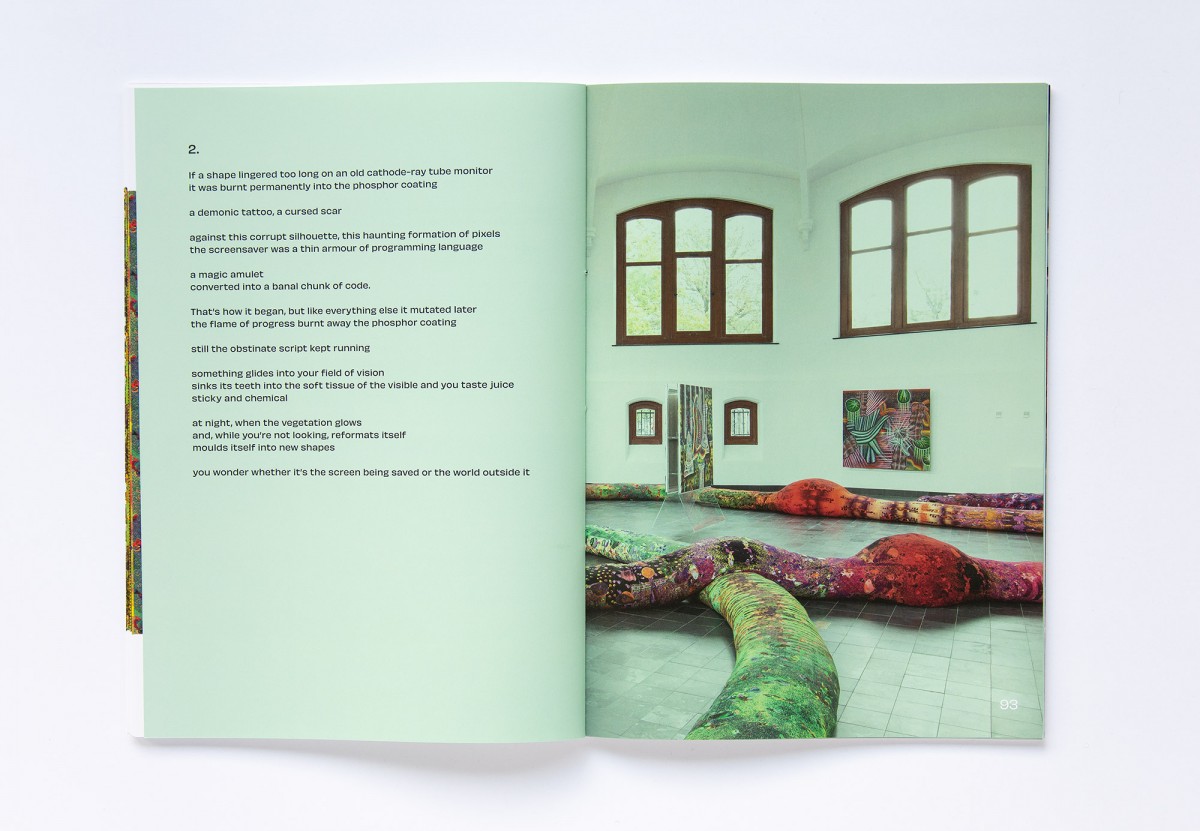 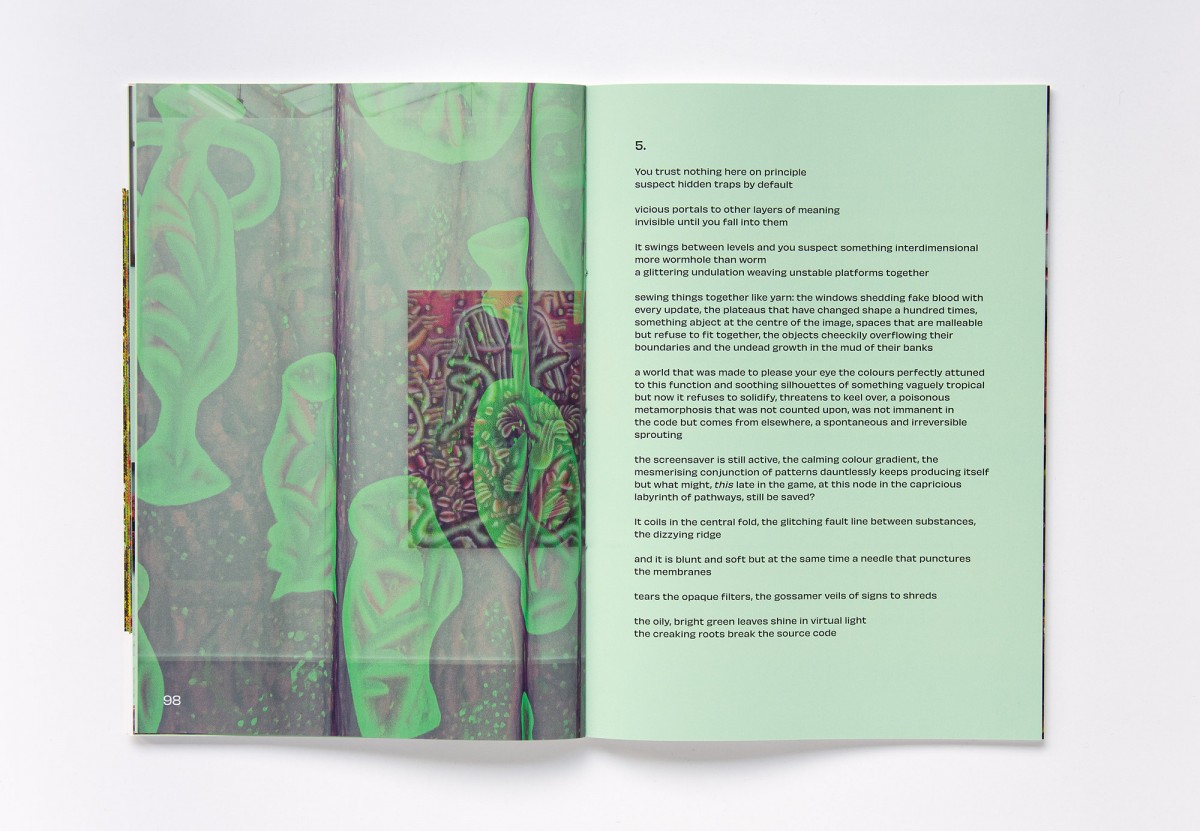 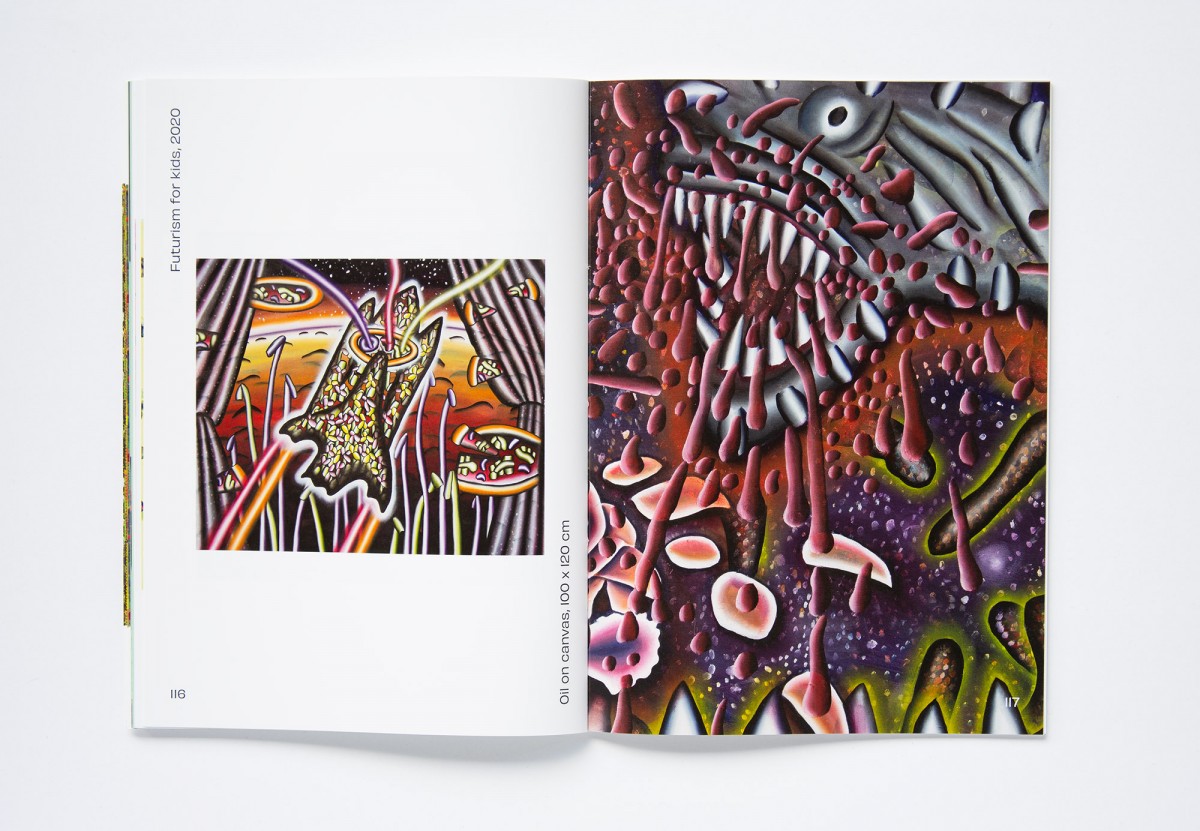 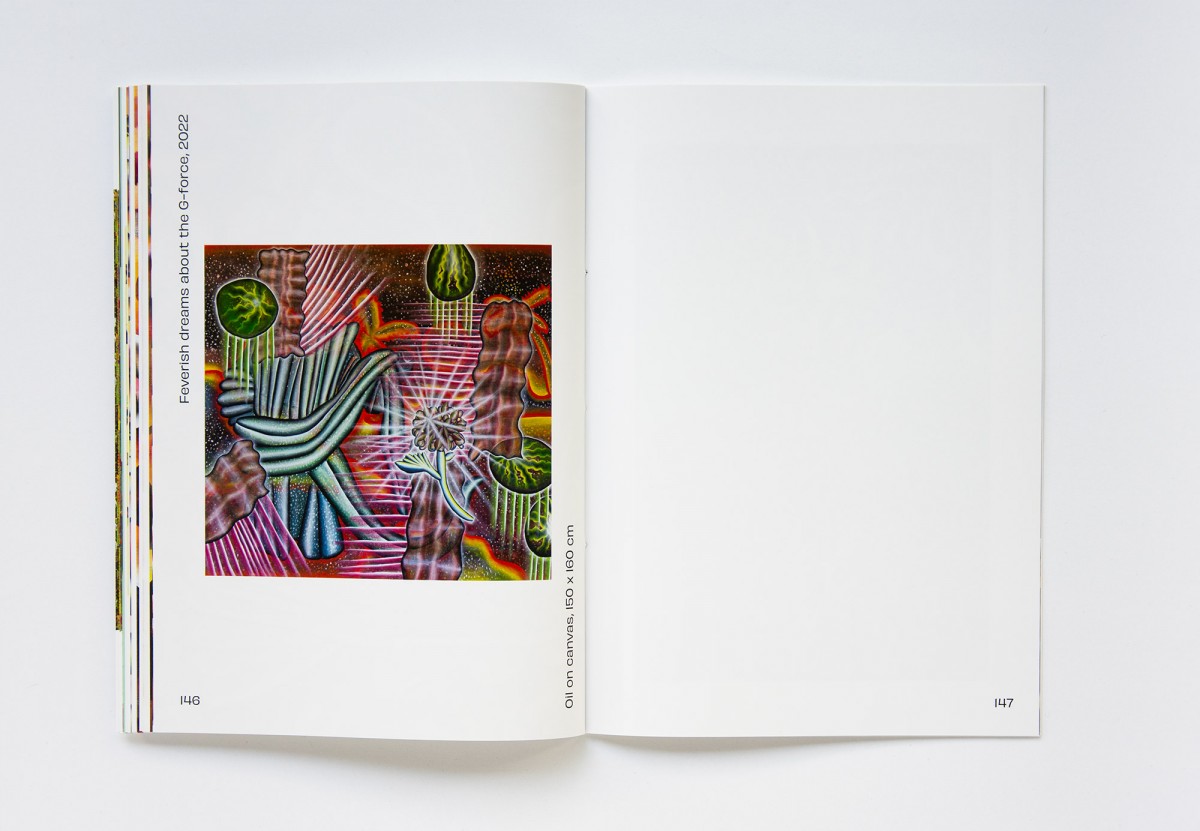 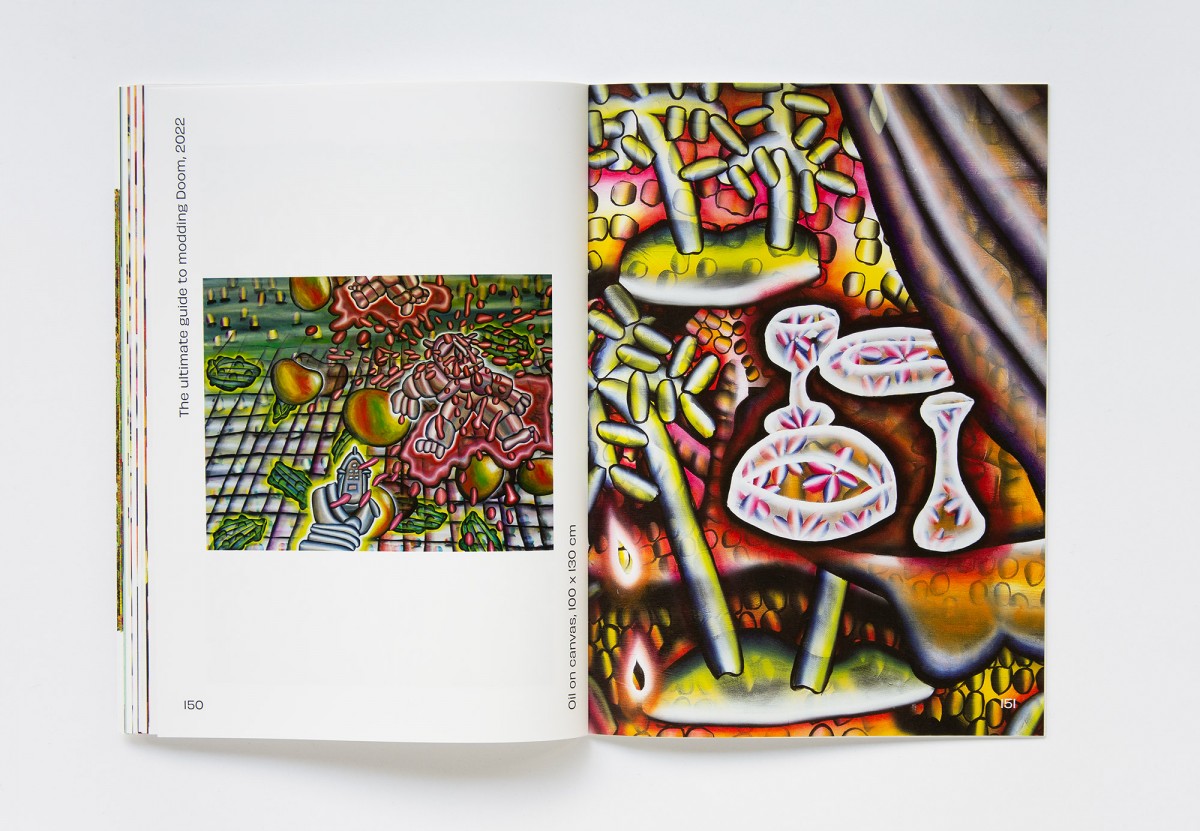 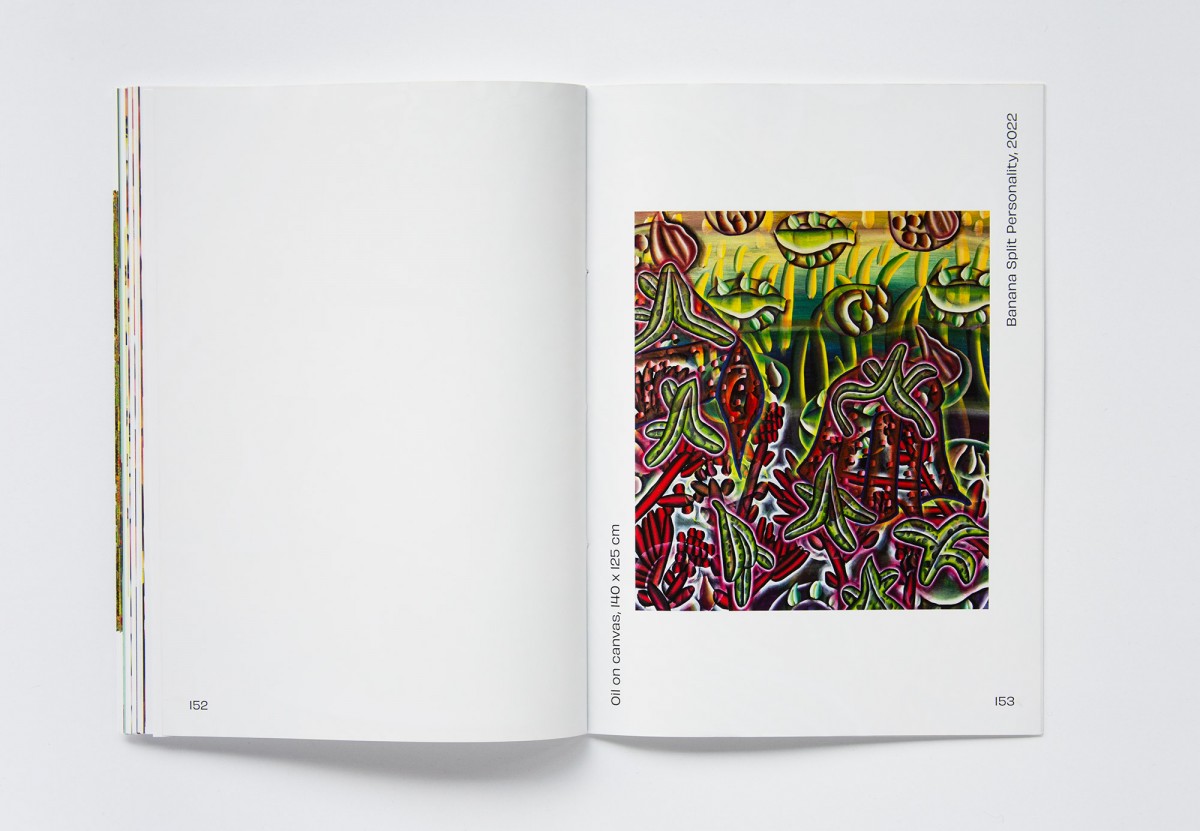 In her work, Lisa Vlaemminck explores the boundaries of painting, creating an exciting, vibrating and disorienting universe. In her images, she questions very classical phenomena in painting, such as the landscape and the still life, by freezing them behind semi-transparent layers of paint. We catch a glimpse that feels familiar, but soon find that nothing is what it seems. Vlaemminck’s work oscillates between the microscopic and the interstellar, as well as the amorphous spaces in between. Image, material, shape, texture and form mutate into compositional playgrounds floating in a newly created universe where different laws and rules apply.

The book ‘Screensaver Error’ is conceived as a symmetrical, folded stack of sheets with images of Lisa’s paintings and collages.
At the heart of the book is the sixty-metre long, worm-shaped textile sculpture, which runs like a stream through the book for many pages. The book consists of one section of 144 pages held together in the centre by coloured bookbinder’s thread. The ‘stack’ of sewn paper sheets are not trimmed on the cut, creating a convex shape that is entirely in keeping with the language of Lisa’s work. As an object, the book has the status of an autonomous work of art.

In KIOSK, Lisa Vlaemminck presented a series of new paintings and a sixty-metre long textile sculpture that occupied the various exhibition spaces. For the design of the fabric, Lisa worked patterns that form a long colour gradient. At the end of the exhibition, the sculpture, Meat A Morph Hose, was cut into 35 separate, new sculptures that were offered as unique artworks.

The artist is reprented by gallery rodolphe janssen
The realisation of the book is supported by the Flemish Government.